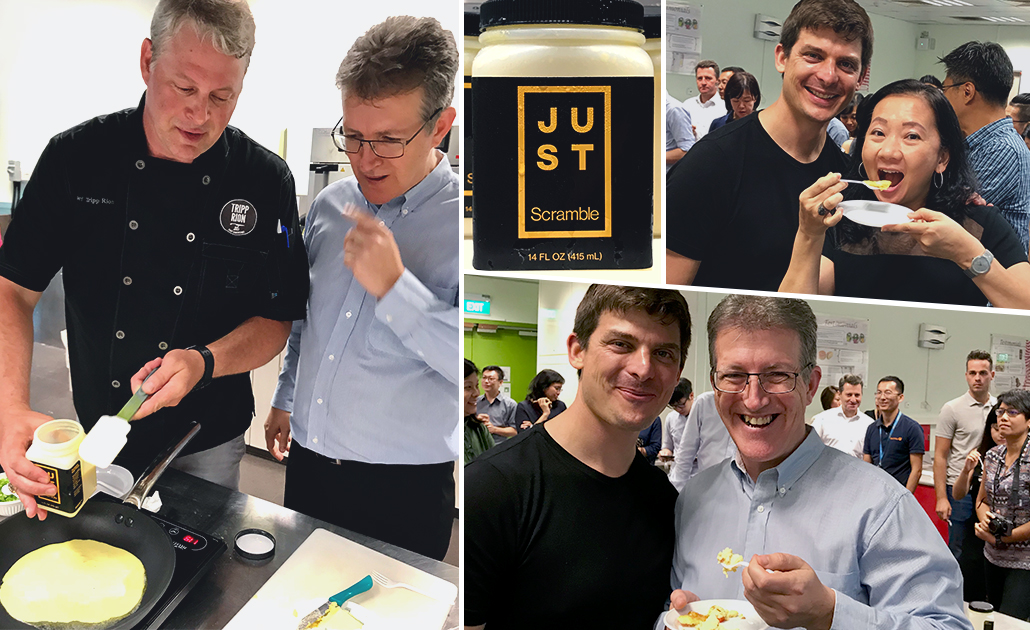 Two members of our leadership team, Dr. Jonathan Middis and Sally May Tan were invited to a closed-door event organised by Founder of JUST FOR ALL, Josh Tetrick, held at the Singapore Food Innovation & Resource Centre for an up close and personal experience.

Tetrick shared candidly not just about his personal couch-to-successful startup journey, but also boldly about their company’s business mission based on ‘eating well is a basic human right’…and changing the way the food system has been processing and manufacturing products over the last century. Admittedly, it has got most of the world’s population in the health and nutrition fix that it is in today where the costs of tackling the rise of chronic illnesses are almost too much to bear.

It was an eye-opening encounter, not just because we were allowed to go behind the curtain to have a little peek at how Tetrick’s team has developed a process and toolkit using big data to aggregate and learn more about plants, their health, and especially their attributes in relation to food qualities.

The fact that most of the food system today relies mainly on a handful of crops – such as soy, wheat, rice, corn – and also on animal protein has put the entire supply chain system off kilter. Out of more than the 350,000 species of plants, surely there is more out there that’s also nutritionally good for our bodies. And out of their early work, the JUST Scramble product was borne and that was the one that was showcased at the event to much amazement. All we can say is when the ‘egg’ mixture (made primarily from a varietal of mung beans), it cooks, looks and behaves just like eggs!

Dr. Middis even took a chance to scramble some for us on the spot. Verdict: If no one told you anything about the scrambled egg you are eating, you would never know the difference! And no chicken had to be cooped up or injected with any nasty drugs to let us have one of the world’s most favourite breakfast fares. Amazing? We think so.

Building a Healthy and Sustainable Future

Tamu Pte Ltd neither makes nor gives any warranty of any kind with respect to any subject matter or information included in, or for the completeness or accuracy, of this web site.

Tamu Pte Ltd is not responsible for any actions (or lack thereof) taken as a result of relying on or in any way using information contained in this web site and in no event shall it be liable for any damages resulting from reliance on or use for any purpose of this information. Nothing in this web site is intended to be an offer which is capable of acceptance and/or inducement of any kind.

Descriptions of, or references or access to other publications within the web site do not imply endorsement of those publications.

This web site could contain technical inaccuracies, and changes to the information contained herein may be made at any time without notice.